So last weekend we took the plunge and started toilet training. We skipped the potty part as he never really mentioned one and had done a few wee wees in the toilet to date. He had moved from nappies to pull ups a few weeks ago so we were slowly getting there. 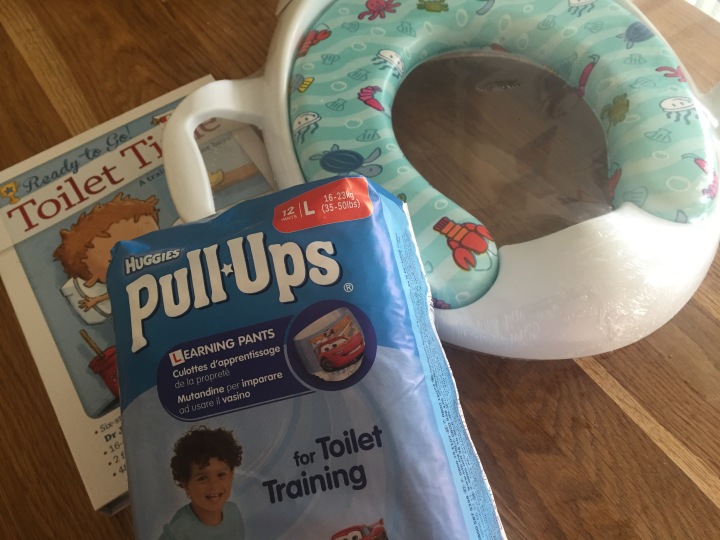 We had been using a chart for bed where he got a small ‘prize/pressie’ at the end of the week so a boy in his class was using jellies-something I usually never give him but we chose that route. The sleep bribery is working and the chart is really no more so we hoped this would do the same.
Saturday morning we got up, changed his pull up to pants and all seemed fine. 2 early accidents, a pull up for nap time and we left the first day evens stevens-3 wees/3 accidents-=3 jellies & 1 wired boy!

He did get a little upset when the accidents happy but we reassured him it was normal to make mistakes as he was learning and he came out of day 1 well.

We took a last minute offer from my mum for an overnight. I was reluctant as I didn’t want to mess with any progress but she was asked to be house bound and go with a similar approach to the day before. 1 accident and 1 wee in hers. A short car journey went well and I think we finished that day with 3 wees in toilet, 2 accidents.
During the week he upped the ante and accidents were behind us on the wee front but had one or two with poos. This really upset him but again we didn’t stress and just reassured. The stakes were high with the poo-we decided this was a 2 jelly award!

On Tuesday evening, before return to school the next day a poo came, this time in the toilet. I was ridiculously overjoyed. It had been a good day in the world of toilet training. We even got out and about with a few big toilet visits and all went well. Just one small accident.

Off to school he went on Wednesday and I called in and he was doing well. No accidents this day-progress.

Then on Thursday, a longer day in school he had 2 poo accidents. 1 they told us about but not that it was a poo {we only discovered this delight when opening the bag on return home} the second one o noticed when we arrived to collect him. I was a little frustrated. There was a different teacher in his room to the norm and I just felt they weren’t engaging in the process properly. We spoke to the manager, explained to Josh it wasn’t his fault and Friday came.

So today, 1 poo accident but he had told them and was just shy of reaching the toilet. Again progress because I didn’t want him starting to think it was ok to poo in pants. 🙈💩
We go into the weekend with hope of nailing it but will finish off the jellies and still bring spares in his bag and then its onto big boy bed transition. We will concentrate on night training then. All go but for now he is taking it in his stride!

2 thoughts on “Toilet Training with a touch of bribery 😉🚽”